Congratulations to the Cincinnati High School Boxing Team on its most successful competition against Aquinas Institute ever!  The team traveled to Rochester, NY on Feb 7-8 to take on Aquinas in the 11th annual competition between the two boxing programs.  The trip was a lot of fun and a great experience.  There were 18 total matches, with CHB going 15-3 overall!  This was by far the most successful CHB has been in this competition, as the two programs have been fairly equal the past several seasons.  Aquinas has a young team and we know they’ll be training hard for us next year.

The show opened with 6 girls’ matches.  In the opener was Reagan Hassler (freshman, Badin).  Reagan’s opponent came out strong and bloodied Reagan’s nose in the 1st round.  Despite blood running down her face, Reagan got more aggressive in the 2nd, coming forward non-stop and knocking her opponent down several times.  Reagan took the victory by TKO after the fight was stopped in the 3rd following another knockdown.

In the 2nd match, Hailey Snow (sophomore, Colerain) fought hard but was giving up about 20 lbs to her opponent.  Hailey hung in there all 3 rounds, but the size was too much and Hailey lost by decision.  Next up, Hannah Basil (freshman, Oak Hills) took on a junior.  Hannah used her always strong fundamentals and a stiff jab to win the decision.  In the 4th match, Ragan Wilson (sophomore, Colerain) won a hard fought victory.  Both first year boxers competed hard, but Ragan’s power was a little too much.

Next up came the experienced girls on both teams.  First, Mara Cash (junior, Walnut Hills) used her outstanding footwork to move to angles and pick her opponent apart with long straight punches.  The CHB coaches thought Mara put on a boxing clinic, showing how to use movement to avoid punches while landing her own.  Elle Bisbee (senior, Madeira) saved her best for last.  Elle fought by far her best match ever, using great head movement to get inside of her taller opponent to land clean, crisp combinations to take the win.  With a performance like that, the coaches would have loved to have Elle back next season. 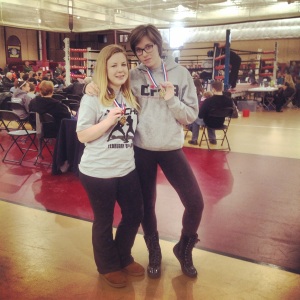 After such an impressive display by the girls, going a combined 5-1, the boys had a hard act to follow.  But they lived up to it.  Starting off was Brandon Adams (freshman, St. Xavier).  Brandon has one of the best jabs on the team and used it to win a tough fight.   Keanu Barnes (sophomore, Oak Hills) was next.  Due to a late replacement, Keanu, at just 113 lbs, had to fight an opponent who weighed 134 lbs.  Despite the weight difference, Keanu was game for the fight and competed hard.  However, the bigger opponent was able to trap Keanu in the corner a couple times and took the decision.  Keanu will learn from this and use his quickness and athleticism better next time.

Next up came of string of 8 wins in a row for CHB!  First, Jake Harrington (junior, Madeira) won a very close decision.  The first round was rough, with a lot of holding and wrestling.  However, in the 2nd and 3rd rounds, Jake slowed things down and used much better boxing technique to earn the win.  Jake listened to his coaches well and made a nice mid-fight adjustment to outbox his opponent.  Ben Leonardi (sophomore, Walnut Hills) was boxing in his father’s alma mater, as his dad actually boxed for Aquinas.  Ben dominated the first round getting several standing 8 counts and then controlled the last two rounds to win by decision.

Next came one of the most enjoyable matches of the show.  Sjors Verhaak (sophomore, Walnut Hills) was taking on a shorter opponent and a southpaw named Spencer Ramos.  Sjors controlled the early parts of the first round, however, the tide turned when Spencer landed a hard left to Sjors body right on the liver.  Sjors was visibly hurt by the blow and Spencer followed it up with several more body shots.  The referee looked like he was close to stopping the fight as Sjors was bent over in pain.  In the corner between rounds, the coaches told Sjors to keep his right elbow tight against his body and to circle to his left to avoid more body punches to the liver area.  Sjors listened and executed to a tee.  He kept his right elbow glued to his ribcage and started using his reach advantage to keep his opponent at a distance.  Spencer did sneak in a few more body shots, but Sjors showed great toughness to gut through them and came on strong late to win the 2nd and 3rd rounds and take the decision.  It was a great mid-fight adjustment and comeback by Sjors and the coaches were really excited by his performance. 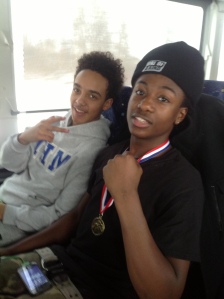 Next was one of CHB’s best boxers, Darius Brown (junior, School for the Creative and Performing Arts).  Darius has been on a roll lately, winning several USA Boxing amateur matches.  Darius kept his undefeated streak going with another hard fought win here.  His opponent was very game, but Darius used his speed and power well.  Darius was probably looking for the one-punch knockout a little too much and will let his quick combinations fly better next time.  Javier Gresham (junior, School for the Creative and Performing Arts) fought probably his best fight.  Javier used big hooks and a monster right uppercut to hurt his opponent to control the entire match and take the victory.

Alec Pleatman (senior, Moeller) was fighting his final match for CHB in his 4th year on the team.  Nobody has improved more than Alec has over the past 4 years.  Alec was bothered by a recent back injury, but didn’t let that slow him down in his match.   A southpaw, Alec used his typical good angles and combinations to win a hard-fought match.

Next up was not only the Fight of the Night and Fight of the Season, but probably the best fight ever between CHB and Aquinas.  John French (sophomore, Walnut Hills) took on freshman Damon Burton from Aquinas.  This match was an all-out war that had the crowd on their feet yelling the entire 3 rounds.  The first round was back and forth with both fighters landing bombs.  However, John just got stronger as the fight wore on.  As his opponent started to tire late, John kept up a relentless pace and gave his opponent no time or space to relax.  John used a great jab in the third round to stay right on top of Damon and take a convincing victory.  Congratulations to both John and Damon on an amazing match.  Just a sophomore and freshman respectively, these kids are going to be tough to beat the next couple seasons! 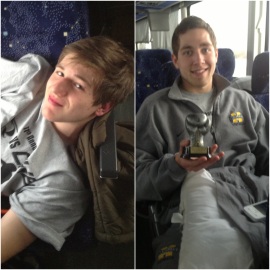 Aaron Webb (senior, Moeller) was also fighting his last match for CHB, a rematch against his opponent from last year, Dan Ketterer (senior, Aquinas).  These kids had a tough act to follow after the fight that preceded it, but both used extremely sound boxing technique to put on a good match of their own, with Dan Ketterer taking a close decision for Aquinas.  Despite the loss by Aaron, the Aquinas coaches were very impressed by Aaron and thought he had the most sound boxing technique on the team, selecting him as the CHB Fighter of the Night.  The CHB coaches felt the same about Dan and selected him as the Aquinas Fighter of the Night.  Congratulations to both boxers! 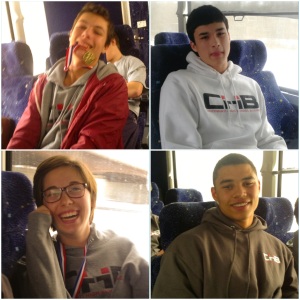 In the final match of the night, Kevin Blount (junior, Walnut Hills), a fist year boxer, was giving up a lot of experience to his opponent, a 4th year boxer.  However, Kevin was more than game for the fight and boxed maybe the best single round of the night in the 1st round, using good movement to land clean straight punches to both the head and body.  Kevin then went on to almost get stoppages in both the 2nd and 3rd rounds, with his opponent just being saved by the bell in the 3rd.  Kevin, who also plays quarterback for Walnut Hills, performed great, but also learned that boxing, despite only being 3 short rounds, is every bit as tough as going 4 full quarters in football.

Thus capped an amazing day of fights and a great season for CHB.  The Aquinas team, coaches, officials, parents and volunteers hosted a great event as always.  We thank them for their hospitality and sportsmanship and wish them luck in their upcoming Mission Bouts!  CHB got the better results this season, but we have no doubt Aquinas will train hard and come back strong next year.

We hope all the kids on the CHB team had a fun season and a great experience in New York.  The coaches are very proud not only of their results, but even more by how every single one of them boxed and competed and how they represented the team.  We’re already looking forward to next season!