The Cincinnati High School Boxing Team and UC Boxing Club put on their first intramural show of the season on Friday, Dec 20.  Team members competed against each other in 16 matches, showing off the skills and technique they have learned over the past month and a half.  All of the team members should be proud of their performance, as they put on a great show.

Three matches stood out as “Fights of the Night”.  Mara Cash vs. Hannah Basil was a fun contrast of styles, with Mara exhibiting great footwork and movement and using her reach and jab to manage distance while Hannah looked to get on the inside to land her combinations and power punches.  A good all round display of boxing technique by both girls.  Sjors Verhaak vs. Javier Gresham pitted two returning team members against each other in an action-packed fight.  Sjors was the busier of the two fighters, landing more punches, but Javier was countering with some big power shots.  Finally, Kevin Blount vs. Ben Leonardi was a slugfest between two of the bigger kids on the team and two good friends from Walnut Hills.  Kevin showed good movement and landed a lot of solid 1-2 combinations but Ben, while bloodied up, showed great heart and kept coming forward.

The coaches’ choice for “Fighter of the Night” went to Alec Pleatman, a senior at Moeller, for his performance against John Hautz.  A crafty southpaw, Alec demonstrated very good boxing technique, slipping punches and sliding to angles to land 3 and 4 punch combinations.  John has a powerful right-hand and landed some power punches of his own, but Alec did a great job of making John miss and then landing his own combinations and then moving to an angle before John could fire back.

There were many more great performances and matches but those above got the slight nod.  We were very proud of the sportsmanship shown by all the team members.  It’s always fun to see two kids fight their hearts out on the ring, but then smile and embrace afterwards.  Looking forward to seeing how much all the kids improve before their next show in mid-January.  Thanks to all the coaches and to everybody else who both helped the team get ready for the show and who helped out at the event. 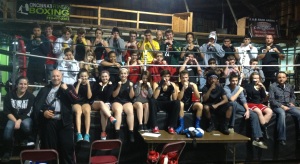